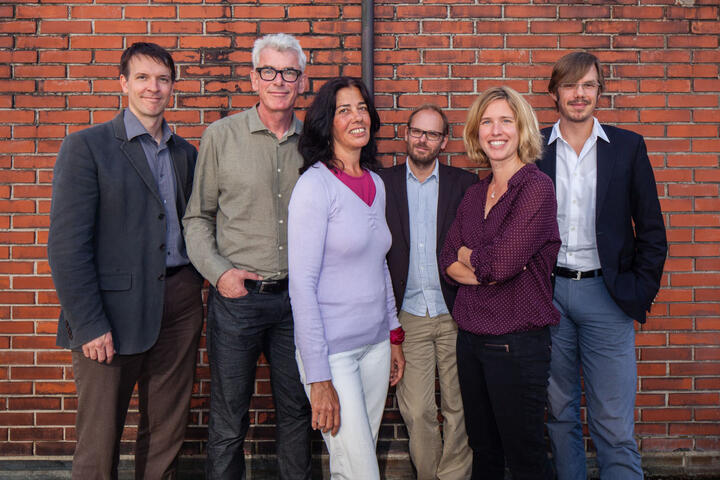 (Manager since 2013), *1975. Trained publishing management and is an eidg. dipl. Polygrafische Technikerin TS/HF, with many years of experience in book production in a publishing house. She worked for several years as key account manager in a printing works, as project head she managed a client magazine in the area of information technology, and most recently worked as project manager in a Zurich agency for communication and design.

Publishing Marketing (since 2022) *1971, is a trained printer and worked for several years in the graphic arts industry, on the publishing side and in agencies. At werk, bauen + wohnen she is responsible for marketing and general publishing work.

Publishing employee (since 2022) *1997. Completed education as multimedia producer. In the field of social media she was able to gain experience during several months at a marketing company. However, her work in the online editorial team of a local newspaper led her to publishing. Since then she is responsible for content management and general publishing work at werk, bauen + wohnen.

The Zurich filmmaker Severin Kuhn is creating film stills for the Cover in 2023. He has a great interest in architecture and has thus also interpreted works of various architectural offices on film. He made his first film about architecture on behalf of Gigon / Guyer in 2011. The following year, films by Kuhn about the work of the Zurich architectural duo were shown in seven rooms at the 13th Venice Architecture Biennale. Since then, architecture has not let him go.
severinkuhn.ch

Dipl. Ing. Architekt HTL, (editor since 2011), *1975. Studied architecture at the ZHAW in Winterthur and at the UdK in Berlin. Worked in a number of architects’ offices in Vienna, Zurich und Berlin. Since 2007 Studio TZ+ in Dresden, since 2010 architecture practice with Florian Kessel in Berlin/Zurich. Various contributions to books and specialist journals such as Bauwelt, L’Architecture d’Aujourd’hui and Trans. Since 2007 lecturer in design at the ZHAW Winterthur.

Dipl. Architekt ETH SIA (editor since 2009), *1967. Graduated as an architect from the ETH Zürich in 1993. Self-employed, also worked in various offices. Published contributions to books and magazines. Taught as an assistant at the ETH Zurich under Meinrad Morger, Andrea Deplazes and Christian Kerez. Lecturer in Gebäudelehre and theory of architecture at Liechtenstein University and since 2007 lecturer in theory of architecture at the ZHAW.

Dipl. Architektin ETH / M.A. (since 2019) *1980. Diploma with Miroslav Šik 2006, followed by her first writing work, which was given an even sounder base by a second master’s degree in mediation and cultural journalism  («publishing & mediating») at the ZHdK. Until 2018 editor-in-chief at Swiss-architects.com, parallel to this, as a freelance architecture journalist she has contributed to the NZZ, Bauwelt, Tec21 and Hochparterre. In the various book projects that Jenny Keller conceives and monitors with great commitment she focuses on the mediation of architecture, as her plea is: architecture affects all of us.

Dipl. Architektin TU/ MAS ETH SIA (editor since 2022), *1980. Studied architecture at the TU Munich and ETSA Madrid, worked in development cooperation (Egypt/ India) and as project manager in various architectural offices in Switzerland. Studied journalism at the MAZ Lucerne, scientific assistant at the ETH Zurich and worked as a freelance author and editor. Research and publication on system building in Switzerland.

Every issue of werk, bauen + wohnen is individually designed – like a book. This variety is based on a concept for the issues that appears to be both contemporary and classic and is related to the design history of this periodical. In the current world of magazines this kind of quality is unique. Here our independent partner Elektrosmog, a studio for graphic design in Zurich, is responsible.  Together with Marina Brugger and Natalie Ricker art director Marco Walser has been designing the issues and the visual presence of werk, bauen + wohnen since 2013. Elektrosmog has regularly attracted attention with often surprising designs and high artistic standards and has received numerous awards.