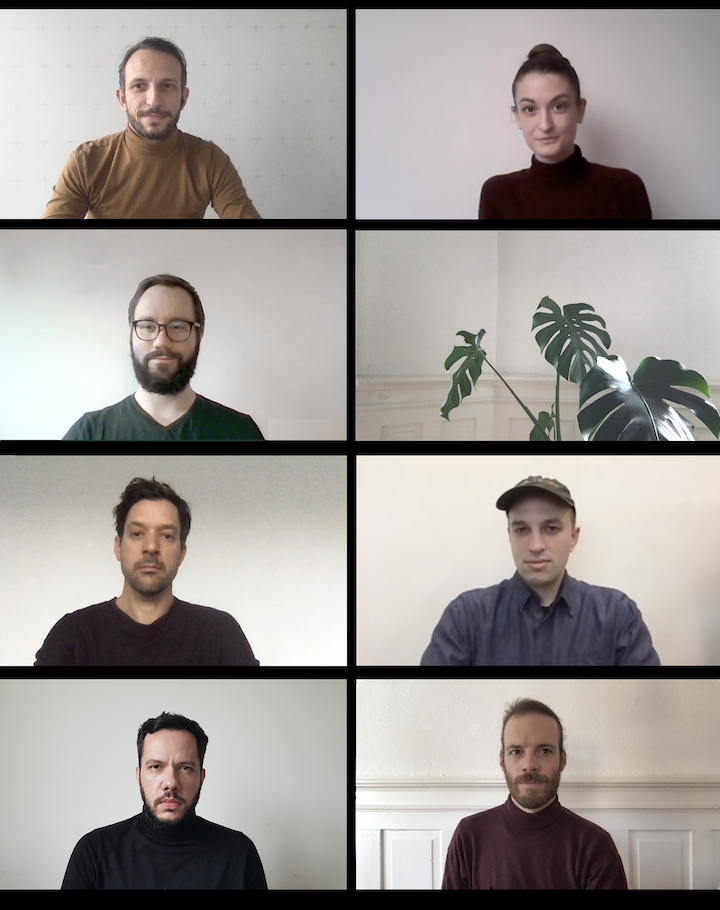 What is TEN? What is its message?

TEN is a Zurich and Belgrade based architecture studio formed in 2019 by founders and core members of TEN association. It focuses on producing new realities by means of buildings, prototypes, materials research, algorithmic design with a range of collaborators, institutional partners and private clients. TEN is composed as a record label; providing possibilities for forming interdependent work constellations for every project. All in TEN have left their places of origin, have become willing nomads. This translates into a strong sense of always meeting for the first time. Such a model of new expectations and the promise of open engagement leads to questioning first principles and the limits within each project. It supports new knowledge generation by transforming existing narratives.

We aim for an architecture that does not merely point out a reality, but creates a shared experience of it. The act of architecture for us is primarily a social act; it delimits territory and lays claim to space for habitation. In this way, we measure architecture not only on its form, but by the way in which it allows the possibilities of life to happen. This can be extended to the guidelines and instructions we give for building and our principles of direct engagement in the process of making, be it the questioning of spatial needs, standards or norms of construction. By doing this, we design with the politics of material, labour and economy, and remain at the centre of every construction. Architecture, in our view, should be less predictable, less expensive and therefore more powerful.

We believe architecture is at its strongest when reduced to simple gestures and clear outlines done well. This is where design effort equates to real value and the field of potentials between these gestures remains open for others to fill. An act of reducing control but not compromising. That is the tempting lightness we seek when we think about architecture at any scale; it is the one that promises less but achieves more, that makes one question expectations, and works hard beyond the image. Avoiding heaviness in detail, and the promise of perfection, we seek an architecture of possibilities and surprise. For this we design with the premise that research and exploring reveal the inherent rules of each project. When we initiate a project, we do so without knowing where we will end with it. We anticipate the final outcome throughout the work. In this aspect, starting with a reference is dangerous for us, so we aim to start with the question or an aim for knowledge we do not yet possess.

The architecture we value the most is the one you can build and experience, or at least when there is a promise of it no matter how surreal it seems. If the profession is to establish its relevance in the future, it will do so by keeping its values in the form of buildable ideas.

Working outside of Switzerland affords us new perspectives and demands an active translation between geographies. We nurture a healthy critique of standard ideas about the production of architecture and its service to industry, norms and automation – both in component and thought. We work on architecture for various social models and on issues larger than its own genealogy. To make this work, we prefer to build a dialogue around values rather than styles, mostly because values give definition, can adapt and evolve. We hope this contributes to achieving a greater shared and public awareness of architecture and a space for creative translation to offer contemporary form to social, material and economic challenges.

We are interested in exposure, in experimenting with new materials, collaborating with people, techniques and methods we do not fully understand. We are interested in ways of collective working and the variety and richness of form and content that this brings about. For this, we have created TEN Institute; an open network exploring the contours and definitions of architecture through emerging forms of critical design, applied research and multi-disciplinary practice. A close friend described us: You are not a traditional architectural office, or a band or a publisher, but you produce and behave like all of them. There is no need for another architecture office, but another way of doing architecture.

What is the background of Avala house?

Avala House is a residence situated in a pastural landscape on Avala mountain near Belgrade in Serbia. The house is a case study on how design effort can turn sufficiency into a desirable form for living. Every element of the house emphasises the performance of structure and space, providing either weight or lightness at specific points, expanse or contraction at others. Avala’s owner — a local craftsman working on interior refurbishments and domestic maintenance — invited TEN to design, develop and build the house. The central premise of the project was to include the future owner in the process of making by specifying only available local material and construction knowledge. This challenged the norm of architecture being a complete conceptual product, delivered to the site via the client, but instead opened the process as a genuine conversation on the process of construction, the future use and practical and necessary maintenance.

The conversation identified material resources, workshop skill and capacities within the range of the immediate region. It also brought about novel solutions like the in-situ casting of the exposed concrete foundations with recycled steel sheets. The accuracy of the formwork was determined by interior joiners, the casting with a self-compacting concrete mixture developed in dialogue with local subsidiaries and contractors. This not only contributed to the local economy but through experimentation in the procedure of construction, offered new applications for local construction skills. Left exposed, this reveals the proof of labour and skill in the forces driving construction, while the formal expression demonstrates the human factor in the production of dwelling. This extends the dialogue originating from the pioneers of Yugoslavian Modernism – a movement instrumental in the transformation of society through the local adaptation of progressive technologies and self-determination in design and construction. In the same way, the making of Avala House in the form of the ideal contemporary home uses everyday materials, formed personally by the skills of local makers to create a product of regional significance.

Avala’s plan is developed on the outer grid as a sequence of four terraces interlocking at corners to offer a new horizon for dwelling. Each terrace holds a different surface material, providing possibilities for a variety of use. The boundaries of the steel frame are constantly challenged by these alterations in material (a hanging net, sheet steel, pre-cast concrete, the open frame) or through the performance of its movable elements. These allow the house to undergo a total transformation of scale and atmosphere. The opaque wall facing the central interior space is made of 10 large pivoting steel doors, allowing the living area to shift from a singular indoor space of 50 square metres to embrace the 156 square metre volumes of the four outdoor terraces. The large stretch of glass on the southern facade of the frame extends the living space to the rise of the distant hills. The customised sun shading closes this expanse, giving a singular interior space, discretely partitioned by a series of floor to ceiling full-length curtains defining the sleeping area from the kitchen, dining, sitting, and bathroom. In its open state, the main living is one in plan, dedicating the entire space to a single program if desired. The house inverts the priority of building a traditional protected shelter in nature, by allowing various scenarios of exposure to nature within the building. 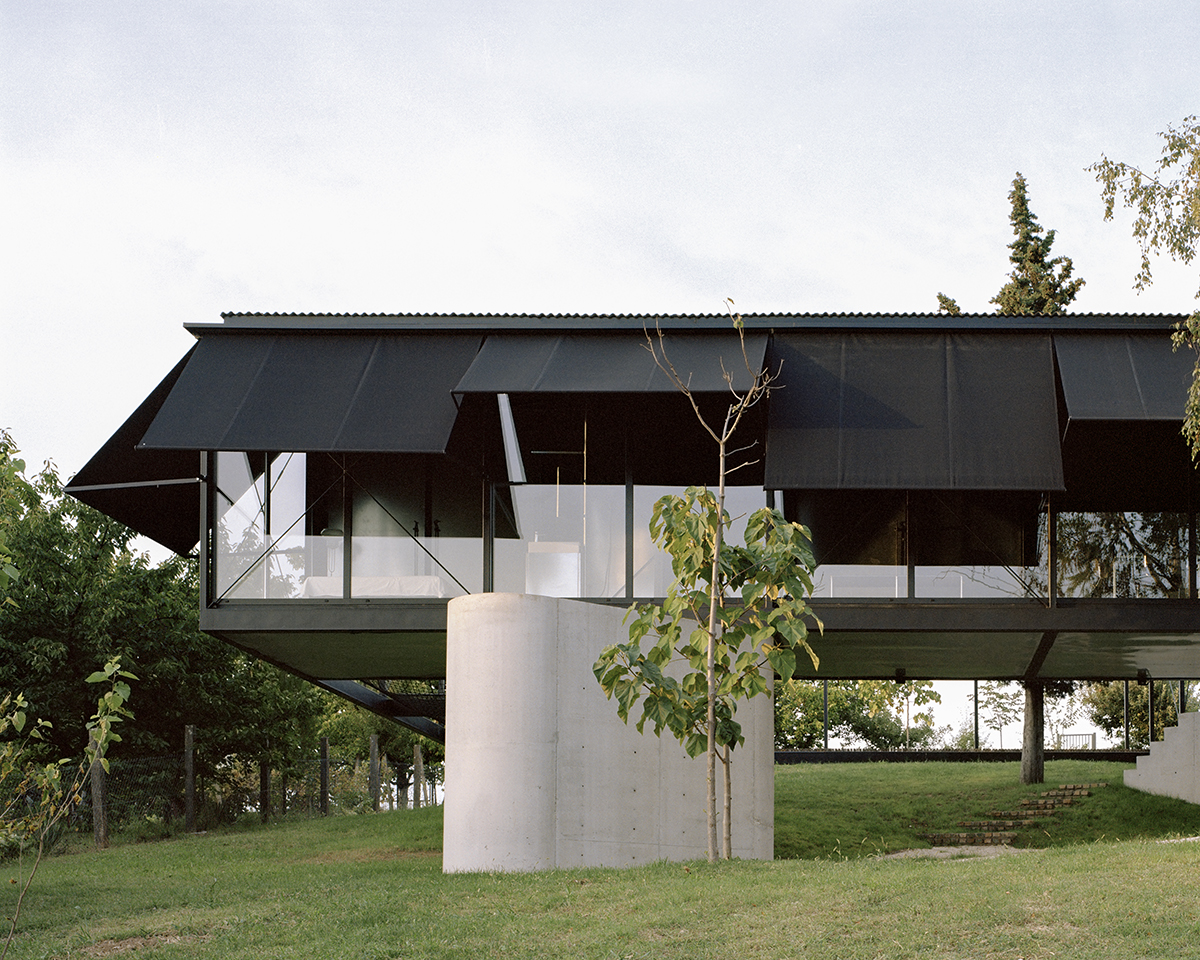 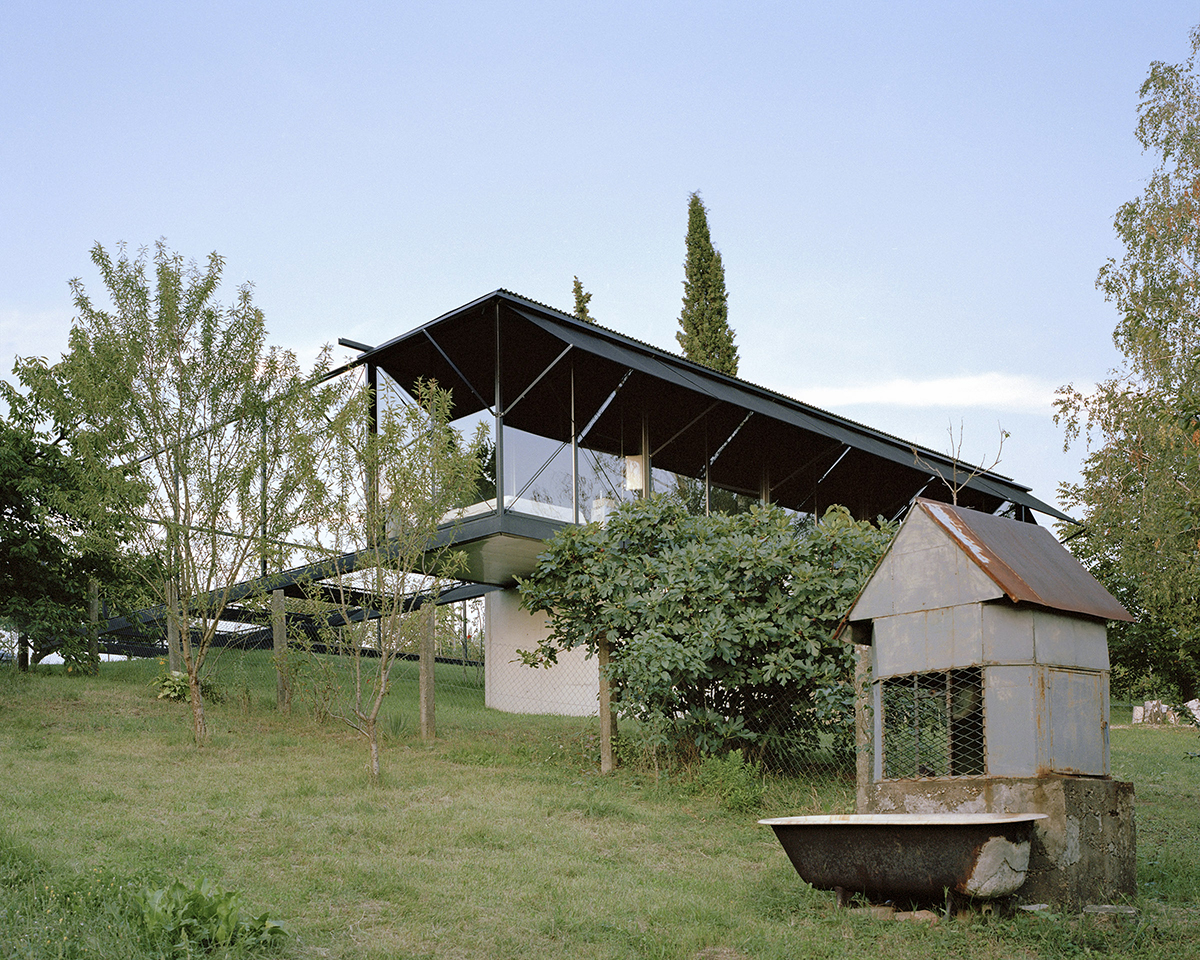 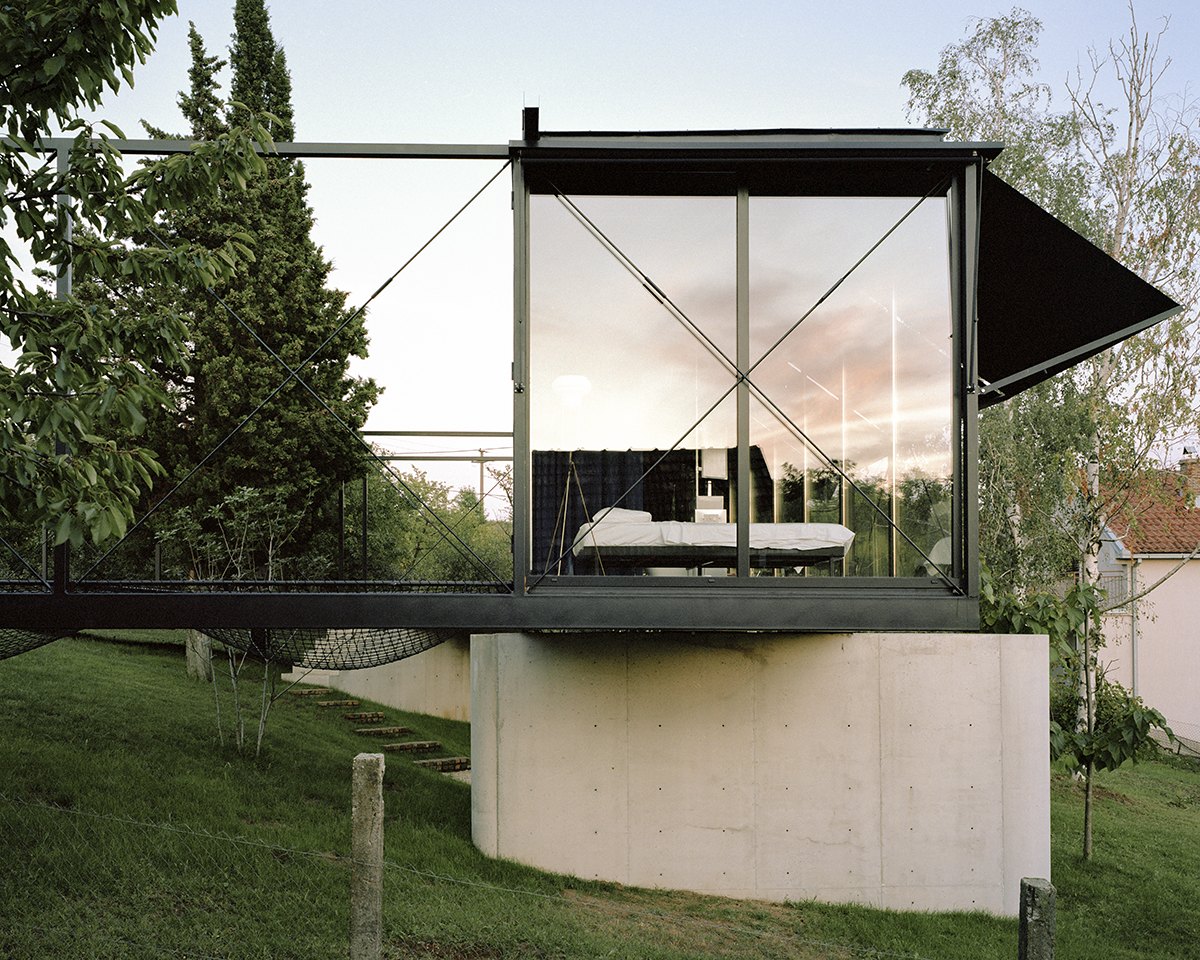 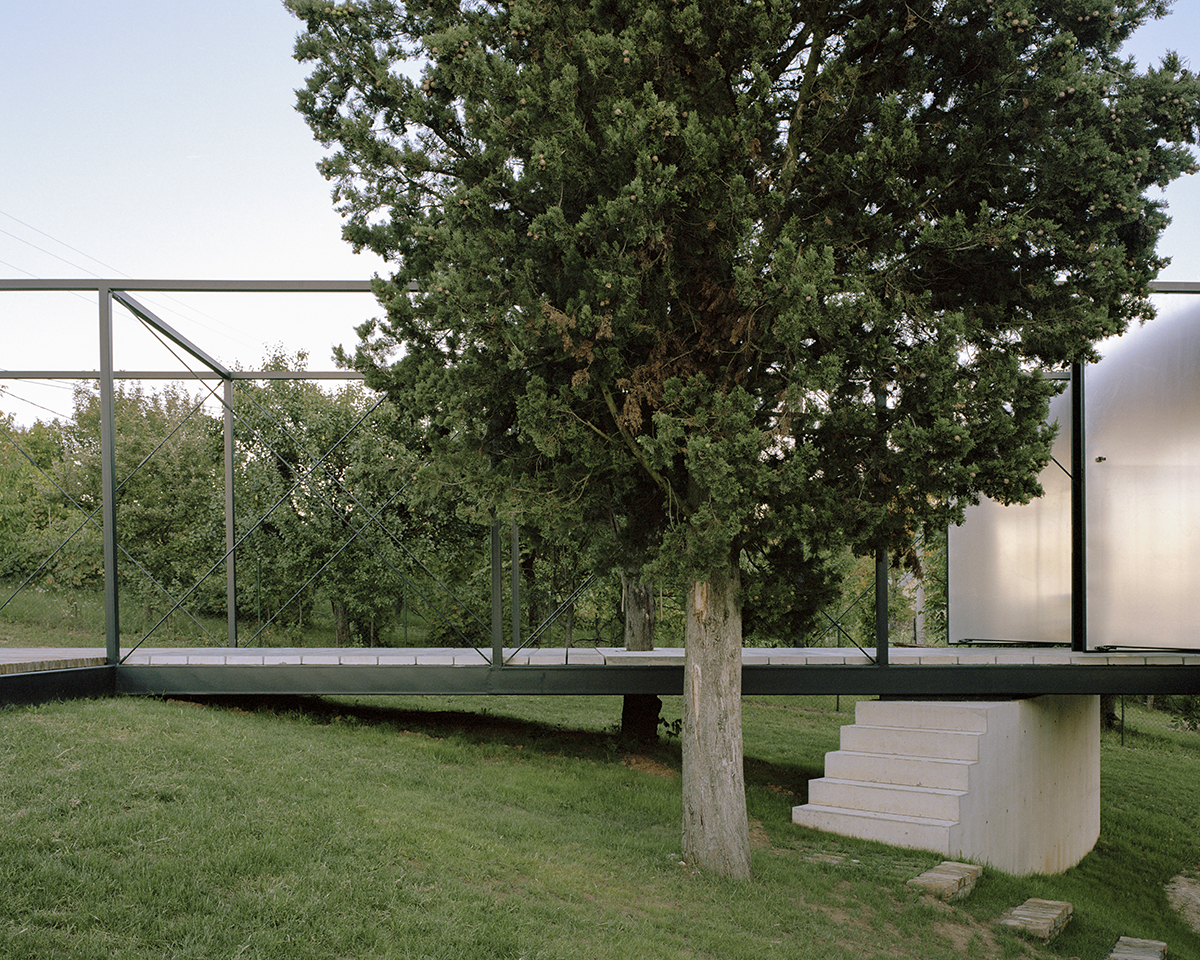 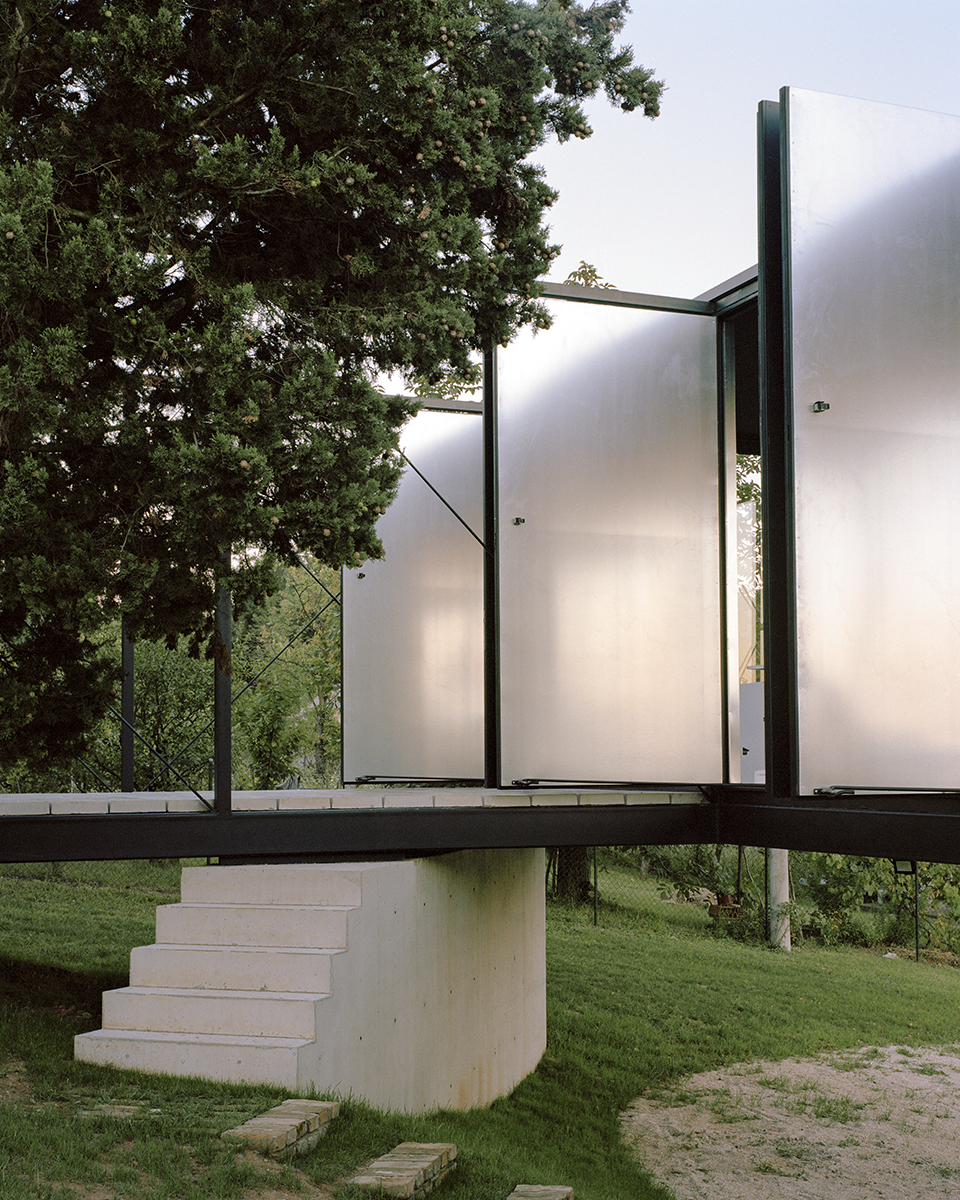 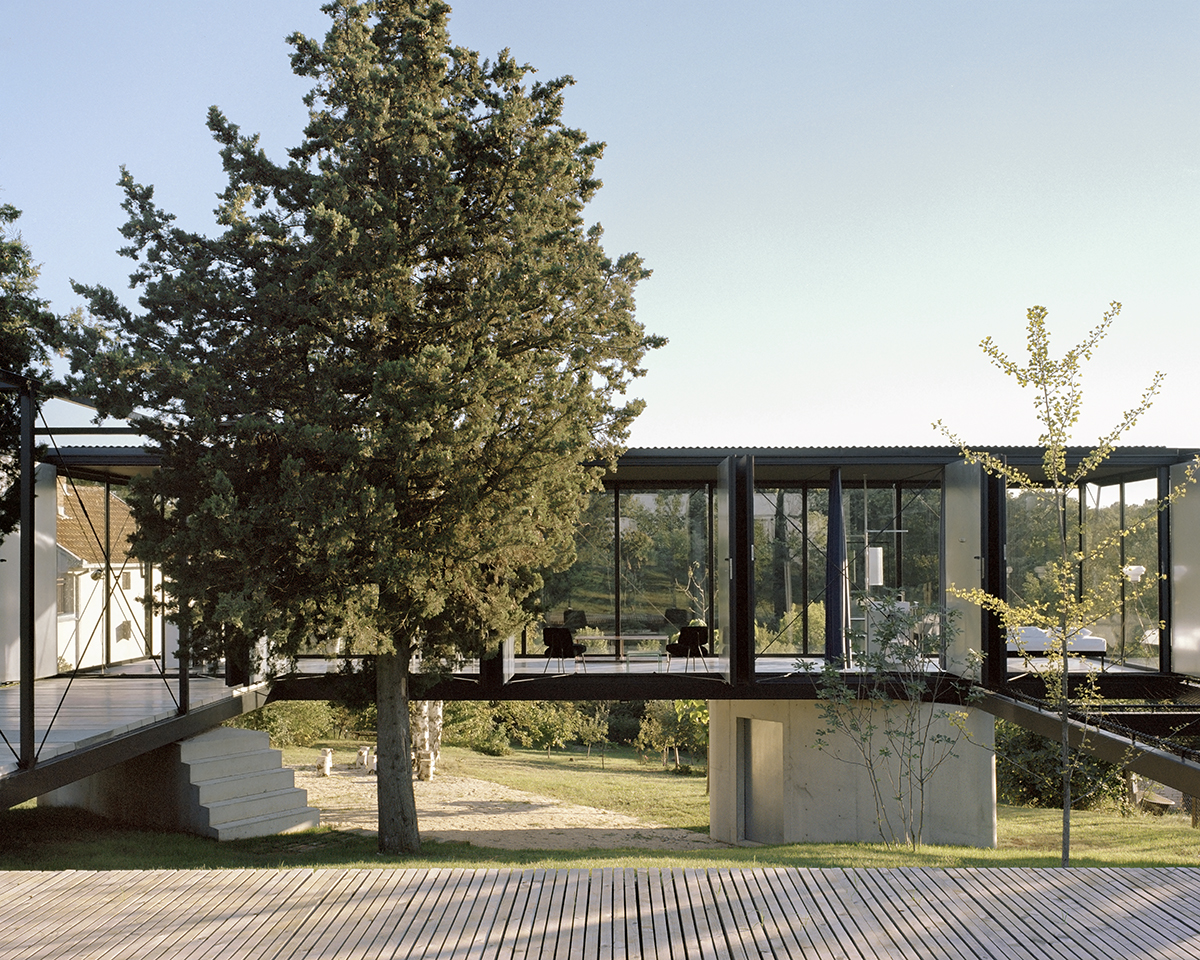 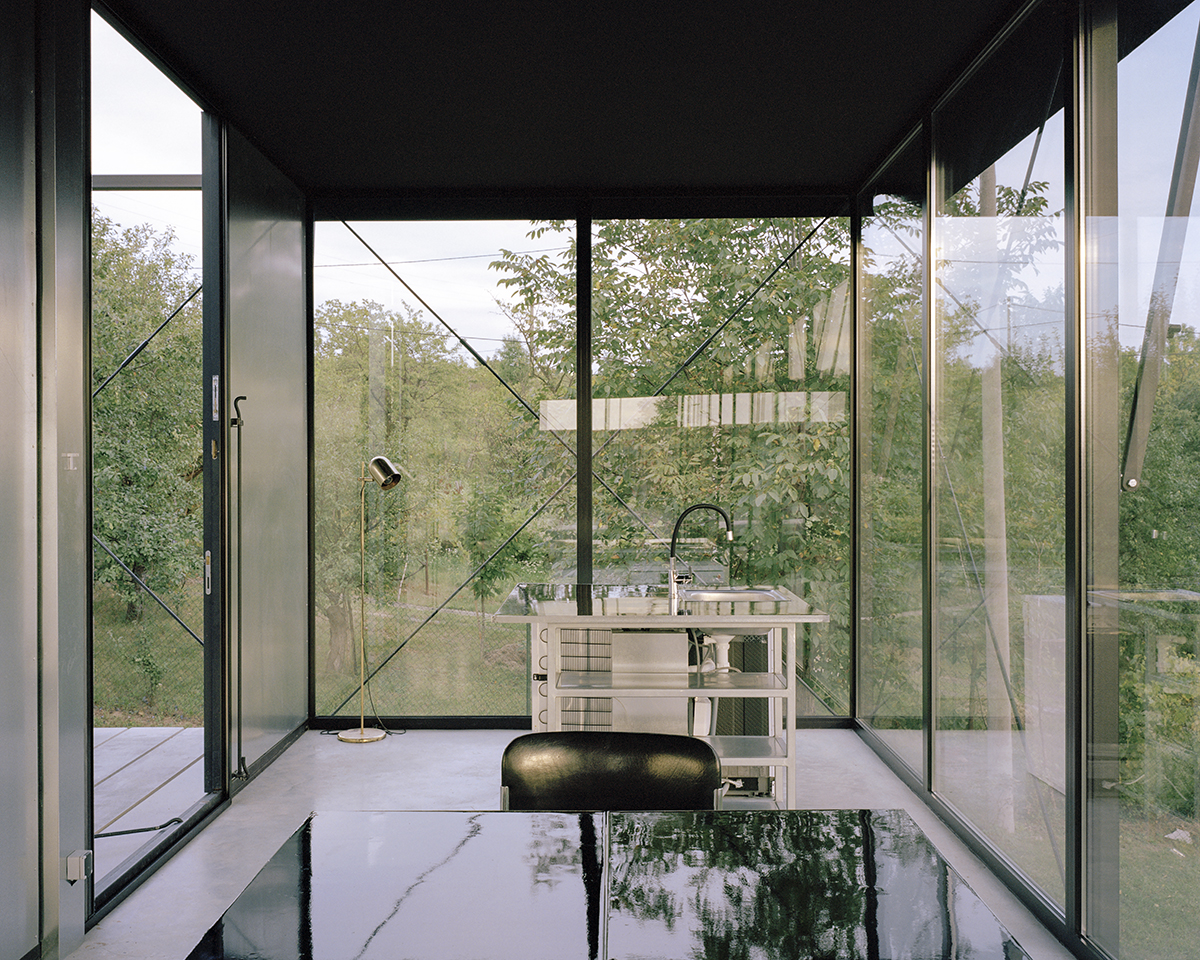 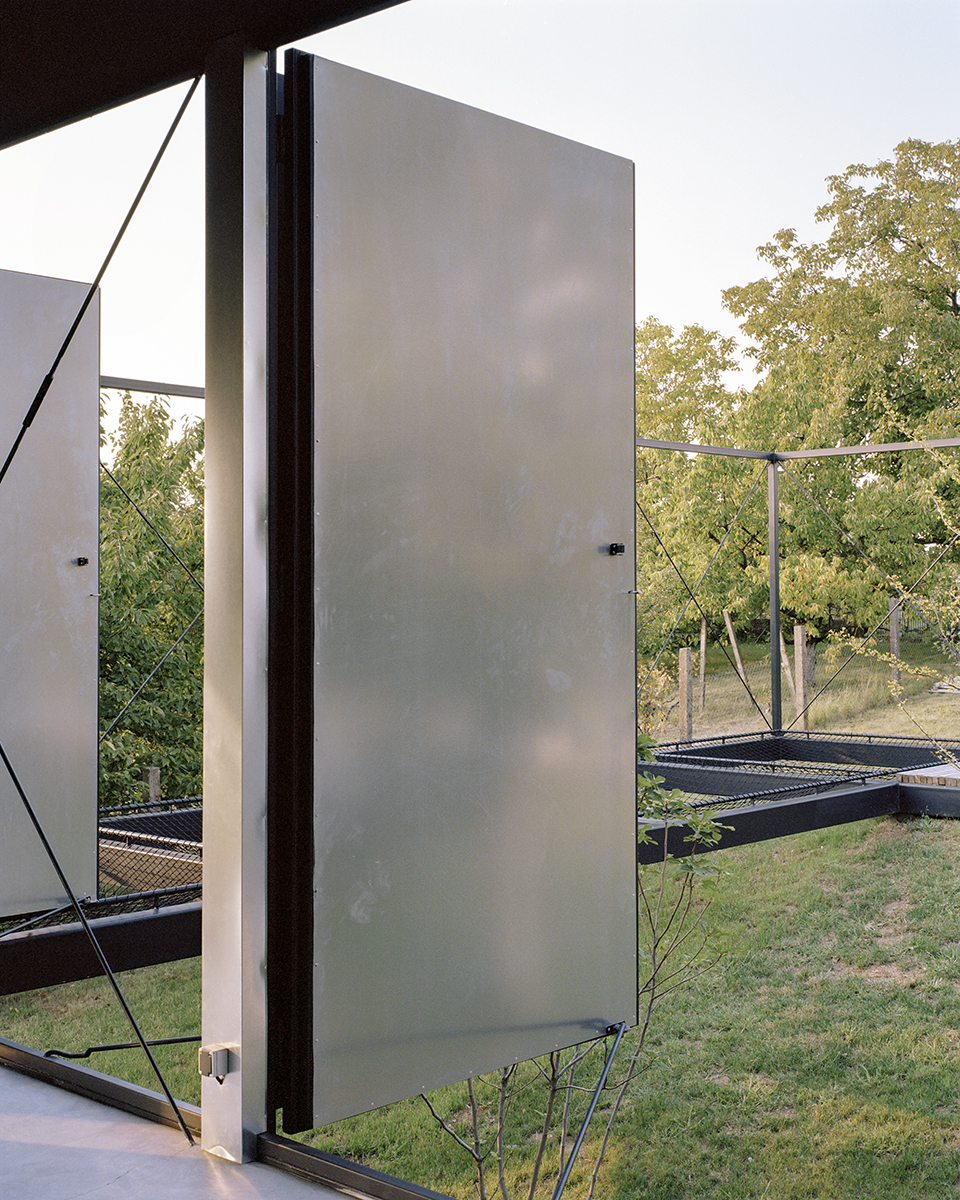 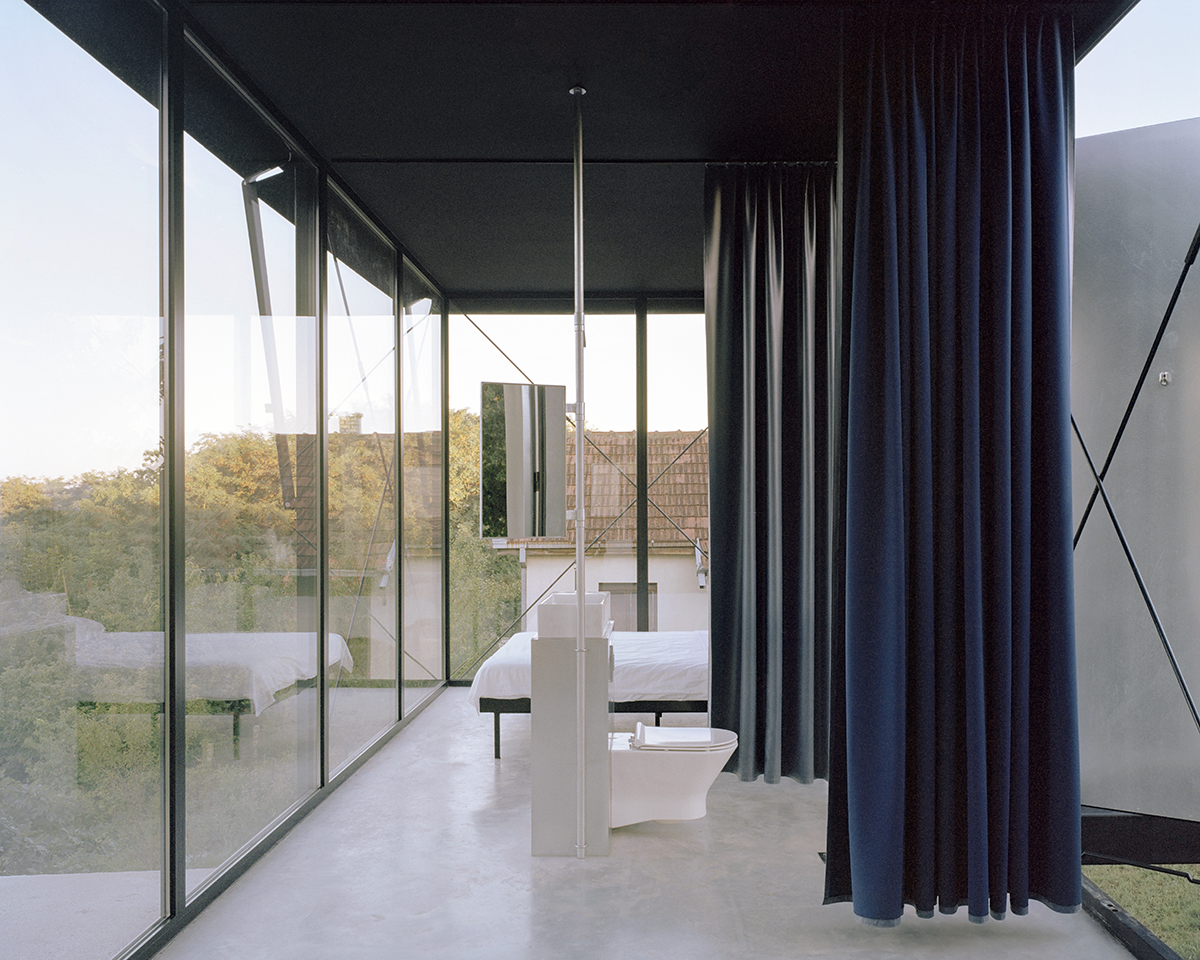 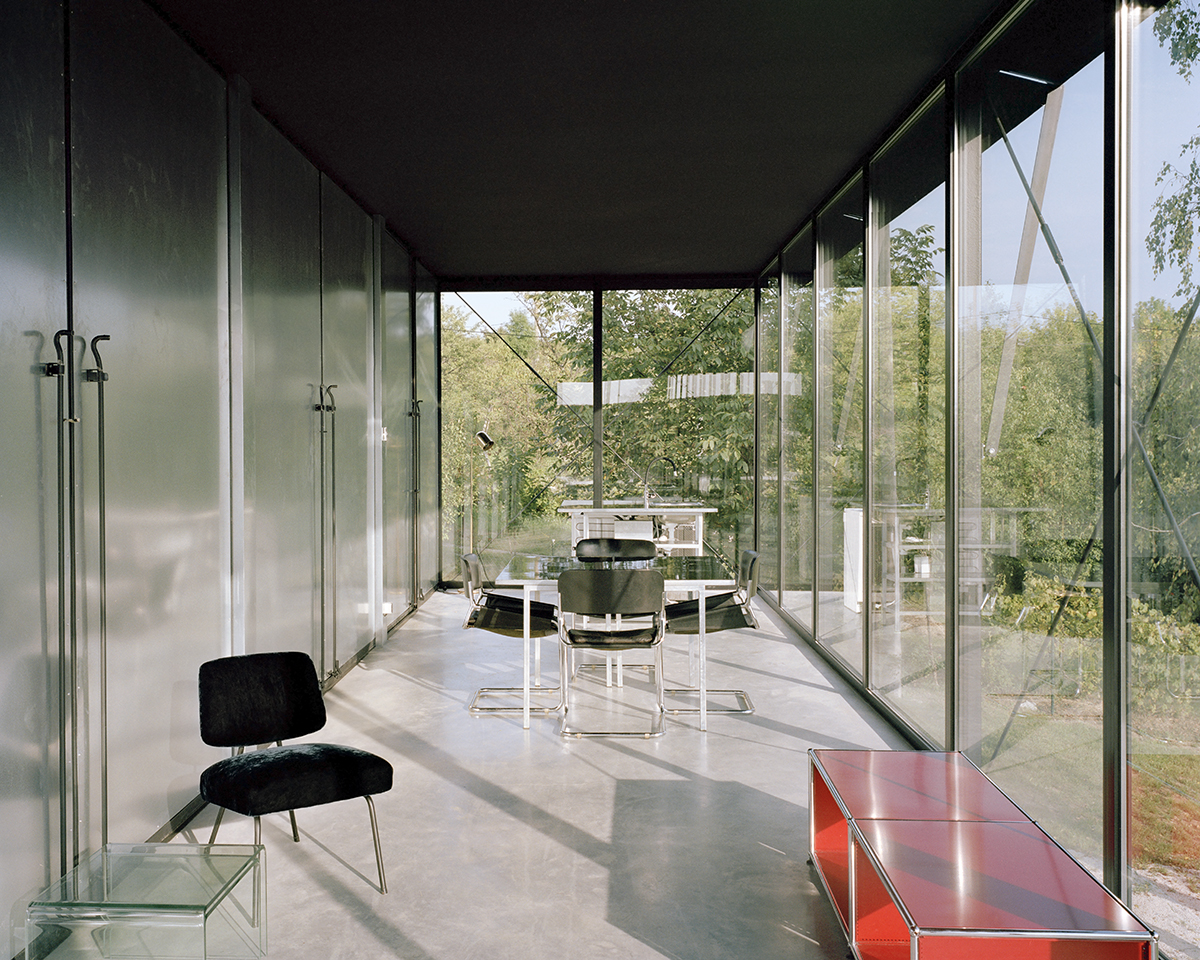 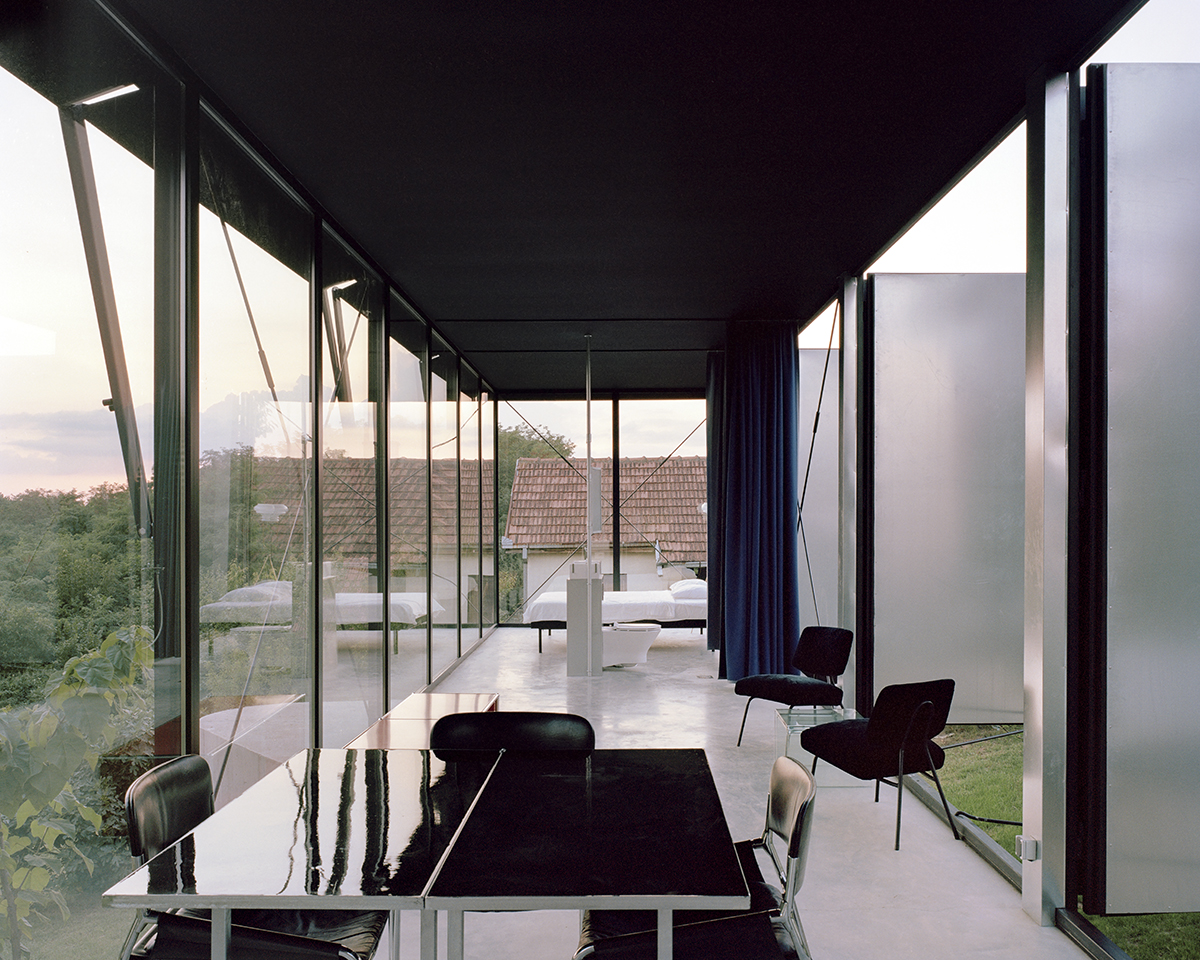 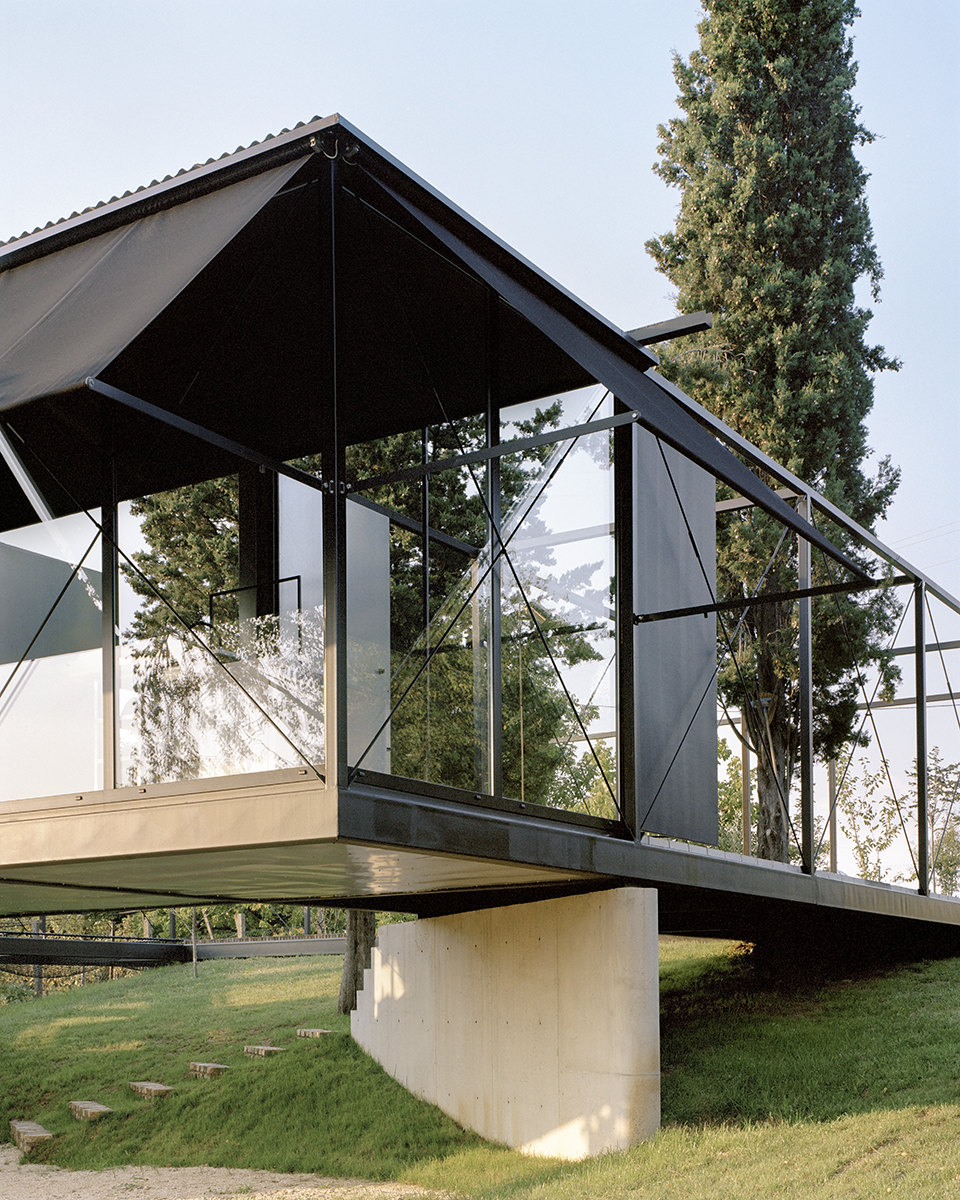